As a Background Actor, you may think all your work happens in front of the camera, but the effort you put in to getting ready for set is just as important. Successful background know that having a wide array of wardrobe can lead to more booking opportunities. At Central Casting, we cast shows like American Horror Story that change settings every season, anthologies like Amazing Stories where every episode takes place in a different time, and series like This is Us that often flash back to the past. You never know when a good period appropriate outfit will help you get cast, so if you’re looking for inspiration, here’s a wardrobe guide for 1920s fashion.

Before we jump in, it’s important to note that every production will have a specific look they’re going for, so always read your Details Blog carefully and craft your look around the instructions given. In some cases, production may provide wardrobe for period looks, but not all ‘20s outfits are intended for period roles. Thanks to the continuing popularity of The Great Gatsby and flapper style, modern prom, party, and other scenes may call for ‘20s inspired looks.

When most of us think of fashion in the Roaring Twenties, we think of glitz and glamour, but there’s much more to the decade’s style than this oft recreated look. By the end of World War I, Edwardian fashion was replaced with more simplistic and convenient styles. For women, this meant transforming the s-shaped outline into a straight flat silhouette. While there weren’t major changes to men’s suits, an attention to detail and elegance led many to say the 1920s were the golden age of men’s fashion.

If you’re looking for 1920s inspired pieces, the decade had a major influence in fashion of the early 2010s, so thrift stores or even the recesses of your own closets may have functional or adaptable pieces you can use to get started.

Throughout the decade, the percentage of women entering the workforce and college programs continued to rise, which led the way for more comfortable pieces. Though dresses were always worn with stockings, lengths fluctuated, but generally waistlines dropped down to the hip while hemlines rose to just below the knee.

For women putting together a 1920s look, the main thing to remember is that day and evening wear were quite different. For day wardrobe, think drop waist dresses made with draped flowy fabric in solid blue, orange, green, or purple tones. Common casual or sport looks often included lightly tapered knee or ankle length skirts in solid colors with a sweater or cardigan.

The iconic twenties style is more commonly associated with evening dresses of all lengths in a straight silhouette with ornate beading, sequin, and embroidery. Formal dresses came in all kinds of colors and patterns with fringe, tiered, or handkerchief hems. While many looks were still modest, low necklines and low-cut back dresses gained popularity with the flapper look.

Accessories were a must to complete any 1920s outfit, especially a cloche hat, headwrap, or headband. Other pieces to consider are pearl or tassel necklaces, art deco jewelry, long gloves, beaded handbags, and t-strap or Mary Jane pumps. 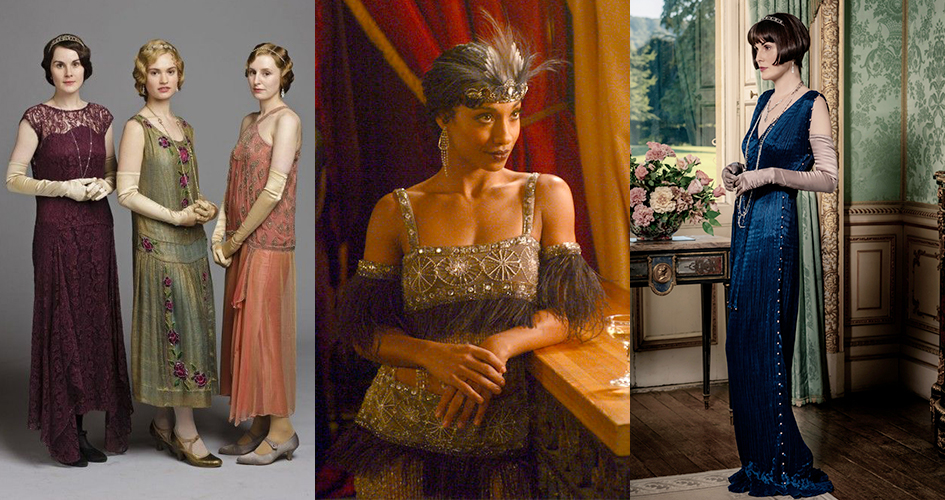 While casual styles increased in popularity throughout the 1920s, men generally still wore a variation of the suit for all occasions. There were two main types of ‘20s suits, a wide pant style and a slim-fitting Jazz suit. The wide style featured baggy knee or calf length trousers, called knickerbockers, or broad ankle length pants. The knickerbocker look was more of a golf or sporty style than an everyday outfit.

The jazz suit is easier to match with modern pieces. If you’re emulating a 1920s suit, start with a slim (but not fitted) single- or double-breasted jacket with notch lapels and straight legged pants. An important detail to remember is that suit jackets, pants, and an optional vest were all the same color and pattern, usually in blue, brown, or gray hues with pinstripe, plaid, or herringbone patterns. Black suits were reserved for formal events and were not worn as everyday or business looks. Neck ties were preferred over bow ties and came in a variety of colors and patterns.

Hats were a must-have, especially homburg, derby, fedora, or newsboy caps. For shoes, think brown, black, or dual-toned Oxfords and black or brown lace up boots. 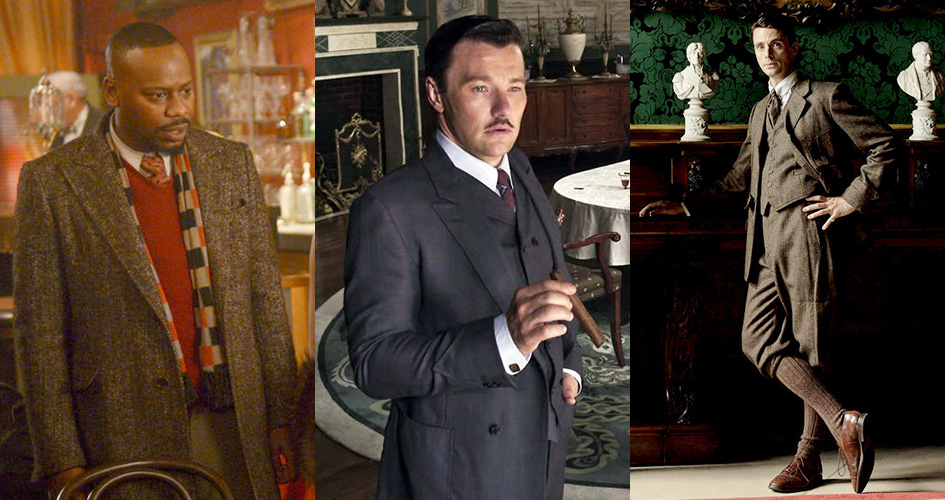 Thanks to the rise of film around the world, people were starting to take their fashion cues from movie stars. If you’re looking for inspiration, these icons are a good place to start. Not only did they impact style in the ‘20s, but their contribution to fashion and culture is still influential today. 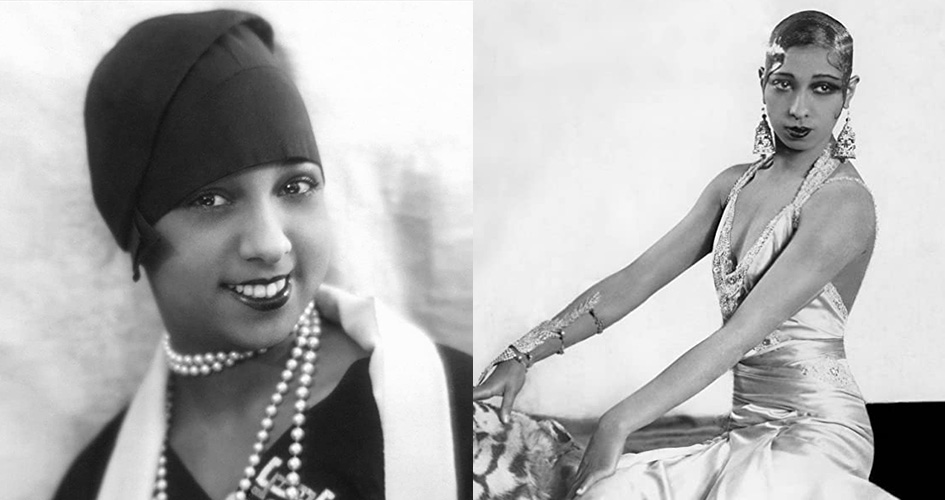 Josephine Baker spent the beginning of her performing career in New York during the Harlem Renaissance, then moved to Paris where she became one of the most successful entertainers of her time. Baker gained notoriety for her risqué performance outfits, like her iconic banana skirt, but was known for popularizing the slicked down kiss curl hairstyle and her affinity for art deco prints and silk formal gowns. 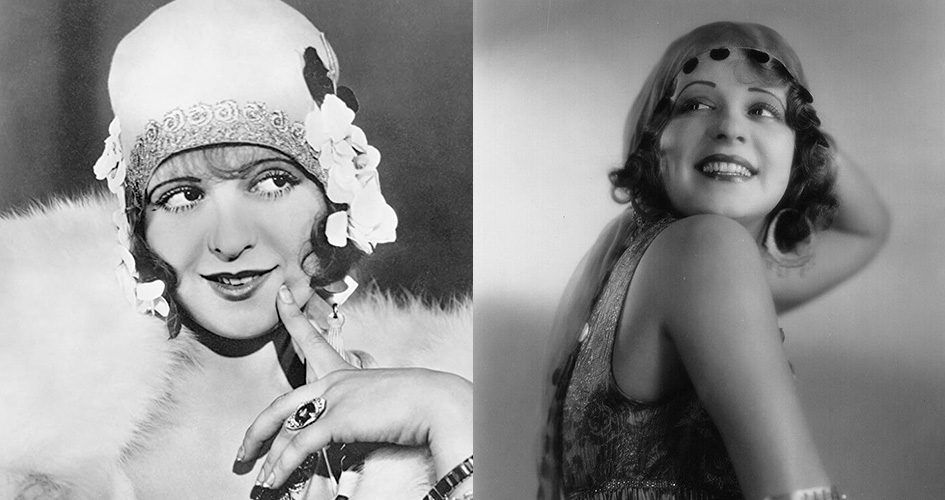 Known as the original “it” girl, Clara Bow made nearly 50 movies in the 1920s and became synonymous with flapper style. Her signature outfit included short pleated skirts, fur coats, Mary Janes, and berets. She was so popular that fellow actress Louise Brooks said Bow “was the ‘20s.” 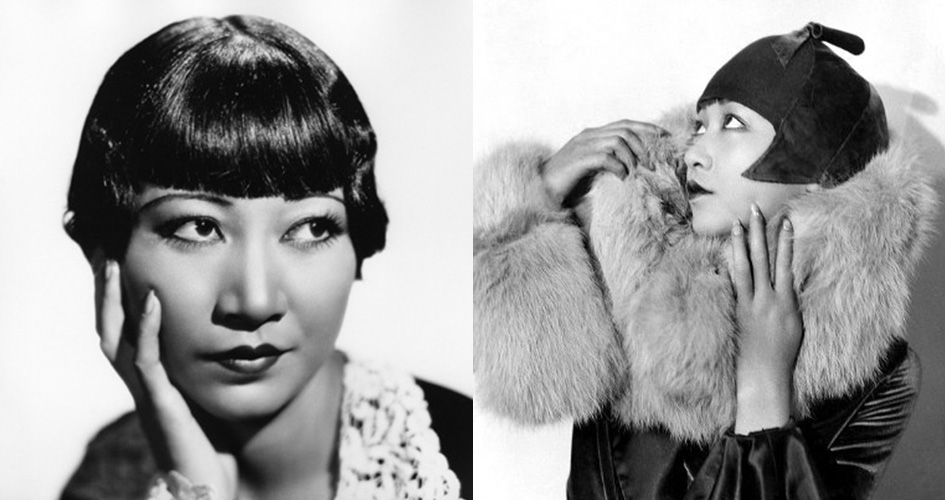 Considered the first Chinese American movie star, Anna May Wong appeared in dozens of silent and talking movies throughout the 1920s. After a decade of only being offered stereotypical roles, Wong left the United States for England where she hoped to find more substantive parts. She became a global fashion icon known for her flapper style and is credited with introducing Asian inspired fashion, like the cheongsam, to western audiences. 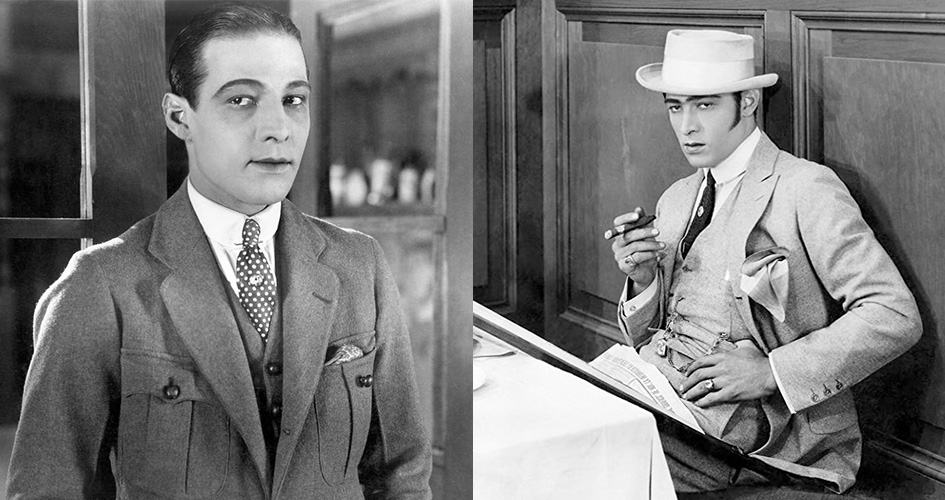 Born in Italy, Rudolph Valentino preferred more extravagant fashion over the common uniformity of American men’s style. While many men deemed his bright colors and jewelry too flamboyant, women saw him as a heartthrob, a title that helped launch him to stardom. As his popularity grew, American men began to emulate his style, especially his signature slicked back hair, wide legged pants, and use of wristwatches. 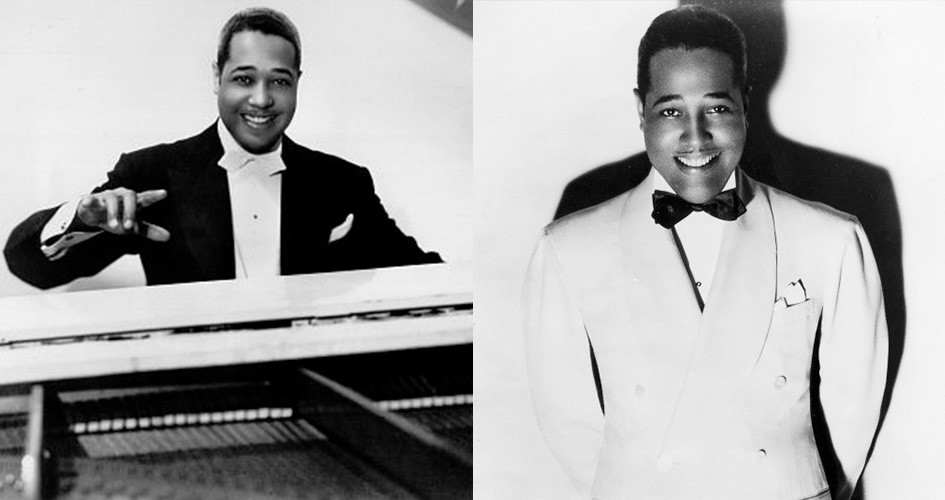 Duke Ellington was a major part of the Harlem Renaissance, playing music in famed New York clubs, recording albums, and appearing in films throughout the late 1920s and into the 1930s. Believing you could never overdress for an occasion, Ellington’s style was elegant and sophisticated, featuring an array of suits and tuxedos in varying colors, though his most popular looks involved double-breasted jackets with wide lapels.