Central Casting casts a variety of projects set in different times and locales. So what do you do if you’re tasked with sending in a photo or gathering wardrobe for a ’30s look? Here’s what you need to know about 1930s fashion to help you put together the perfect outfit for set.

While the playful styles of the 1920s carried over to the early part of the ’30s, much of the decade’s fashion was influenced by the Great Depression. Due to the economic downturn and the increase in mass production, designers began making clothing out of cheaper materials, which actually made fashion more accessible and affordable for the middle class.

Instead of mirroring the world around it, Hollywood went in the opposite direction and embraced the glamor and opulence of high fashion. This distinction is important if you’re trying to put together a ’30s look. Those affected by the Great Depression had a vastly different style than members of the upper class. Geography also played a big part in fashion of the 1930s. Harlem jazz club patrons, Hollywood socialites, and dust bowl communities all had distinct looks based on their status. 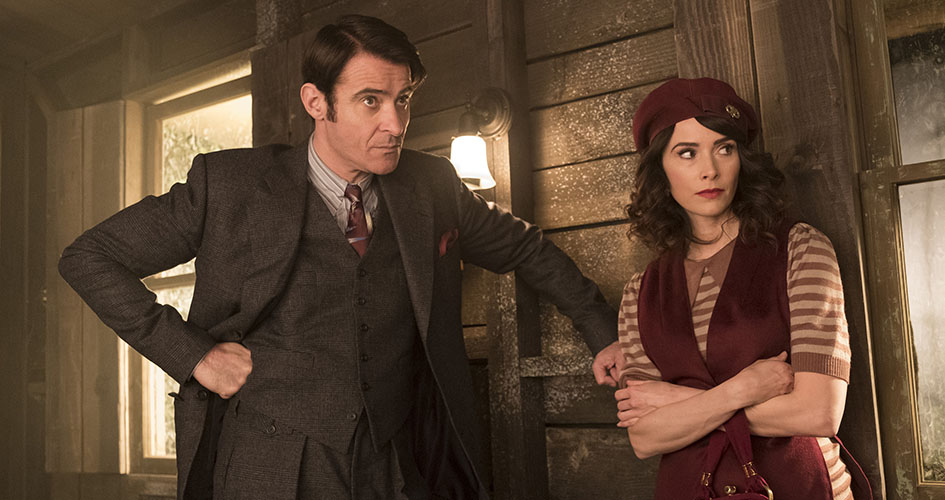 As the 1920s ended, the loose straight silhouette of women’s clothing was replaced with a long slender look that highlighted curves, broad shoulders, and standard waistlines. Day dresses often fell between the mid-calf and ankle and came in a variety of prints like florals, plaids, and polka dots. Accessories were important to 1930s looks and outfits were not complete without a hat and gloves. Women’s hats were close-fitting in both large and small brims and were regularly worn over one eye. For formal wear, the form-fitting backless silk dress was a popular Hollywood look that wealthy women emulated. Furs were also popular accessories, but many women couldn’t afford them.

Throughout the 1930s, men’s fashion still relied heavily on the suit, but it was becoming more popular for men to sport a semi-formal look outside of business and formal occasions. A mismatched style was born out of the Depression as many men could not afford to buy full suits. Bright patterned sport coats were matched with solid gray, khaki, blue, or white pants and solid jackets were paired with striped or checkered pants.

Hats were also a must-have accessory for men of all classes. The round derby/bowler hat was still popular in the early ’30s, but most businessmen opted for a felt homburg or fedora in black, gray, dark brown, dark blue, or tan. For casual looks, the fitted Ivy hat was common in brown and green tweed, plaid, and herringbone patterns. 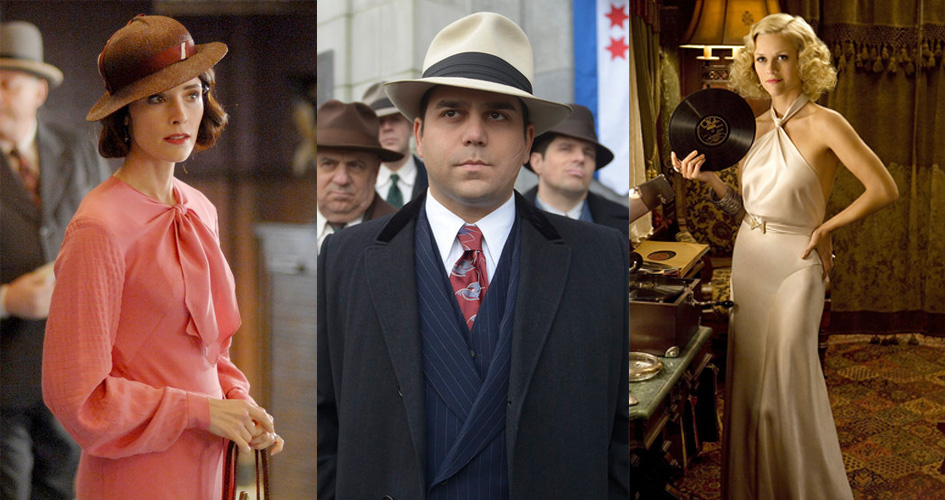 By the mid-1930s, some of the biggest style icons were actresses like Jean Harlow, Greta Garbo, and Joan Crawford. Many high fashion outfits made for them by successful designers were produced as ready-to-wear clothing for the average consumer. Padded shoulders, bolero jackets, and puff sleeve blouses were worn with flared mid-calf skirts. Furs, hats, gloves, and matching purses were still popular accessories paired with pumps, peep-toes, and slingback shoes. While the little black dress started to gain popularity for formal occasions, many women preferred the Garbo inspired bright evening suit.

In 1934, Levi’s launched their Lady Levi’s 701 brand, a new denim pant that was marketed to western women working on ranches. These jeans were high-waisted with straight legs, front and back pockets, and were often worn cuffed. Lady Levi’s remained popular among women who worked on farms and ranches in the ’30s, but didn’t fully enter the mainstream until the 1940s and ’50s.

Men’s suits in the mid-30s were constructed to add height and weight to the wearer. Jackets were elongated with wide lapels and padded shoulders and worn with a matching single-breasted vest. Pants were fit above the waist with wide legs, pleats, and cuffs. Neckties came in a variety of colors and in patterns like paisley, plaid, checks, stripes, windowpane, polka dot, and argyle and were worn with button down collars or rounded collar shirts. 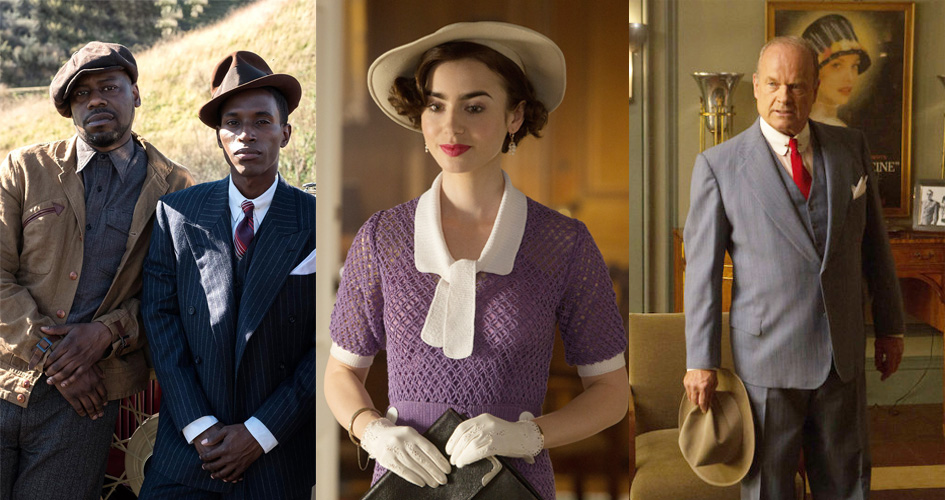 Toward the end of the decade, 1930s fashion became more extravagant. A popular look for women was a black skirt and blouse with a fur coat, a flashy hat, and oversized jewelry. Other daytime looks were more whimsical with bold patterned full skirts, blouses, tightly fitted jackets, and sailor hats adorned with feathers and flowers. For formal occasions, strapless dresses or long skin-tight dresses with short embroidered jackets were popular go-to looks.

As the ’30s wore on, men’s fashion began to change with the seasons. Spring and summer looks included single-breasted suits with patch pockets and a panama hat. In the fall and winter months, suits were more likely to be in darker colors and double breasted with wide cuffs and double-pleated pants. A common year-round look was the two-toned suit in vertical stripes or windowpane checks made from cotton, wool, nylon, or silk. 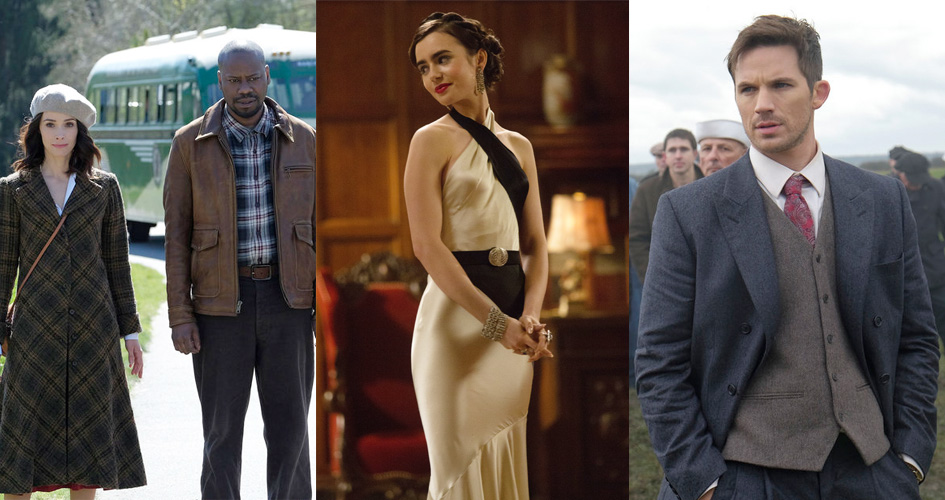 When it’s time to put together your 1930s look for set, the first place you should start is your Details Blog. Your details will include your category information, wardrobe notes, hair and makeup instructions, and everything you need to know about your booking. On period pieces, like projects set in the 1930s, productions may provide wardrobe to Background Actors. Please be sure you arrive with clean and sufficient undergarments and that any clothing you bring makes it to set unwrinkled (unless your category calls for something different).