An exciting part of being a Background Actor is the opportunity to play a wide range of roles whenever you’re on set. One day you can be a football player and the next a 1940s mobster. A key to getting booked is having a variety of wardrobe options so you’re prepared for whatever Casting Directors ask for in their job posts.

While it’s true productions often provide wardrobe for period scenes, you never know when having the right outfit will get you cast. This 1940s fashion guide will help you put together the perfect ’40s look for set.

Style throughout the 1940s was defined by World War II. The beginning of the decade saw a rise in American designers as fashion houses went dark throughout Europe. Then practicality became the driving force as much of the population was serving in the war effort. In 1942, the American War Protection Board issued Regulation L-85 which restricted the materials and methods manufacturers could use to make clothing to control resources needed for the war.

Once the war ended, many of the Paris fashion houses reopened and brought a wave of new styles. One of the most influential of the era was Christian Dior’s “New Look” collection that brought an air of elegance back to women’s fashion. If you’re putting a look together, be aware that style of the 1940s was very distinct between the war and post-war eras.

In the early part of the decade, new styles were being developed by American designers like Adrian, Claire McCardell, and Pauline Trigère. Many designers of this time preferred a lighter and less structured aesthetic than what was the norm in French fashion. For women, this meant a wedge silhouette with wide shoulders, narrow waist (often with peplum), and a single-pleated A-line skirt. Regulation L-85 limited the amount of fabric that could be used to make clothing, so hemlines rose to around knee length.

Popular 1940s outfits for women included square-shouldered jackets with simple blouses and a matching skirt, shirtwaist dresses in long or short sleeves, and Kitty Foyle dresses (dark dresses with white or light collars and cuffs). Thanks to celebrities like Katherine Hepburn and Marlene Dietrich, pants were now a staple in women’s fashion, usually paired with a colorful blouse and matching coat. With silk and nylon rationed and then banned in clothing, women would either go without stockings or would create the illusion of them by putting tan make-up on their legs and drawing a line on their calves to mimic a seam. Common accessories were fur coats, gloves, halo hats, pillbox hats with veils, and clutch purses.

Even in the early part of the decade, many men wore military uniforms, but those who didn’t had to deal with the same clothing restrictions women did. Many men chose to wear their older 1930s style suits to support the war effort by conserving material. Early 1940s suits had a more fitted look and were worn without a vest. Pants were skinnier and made without cuffs, so many men bought longer pants and cuffed them at home. Ties were done in Windsor knots and made of conservatively colored rayon or wool. 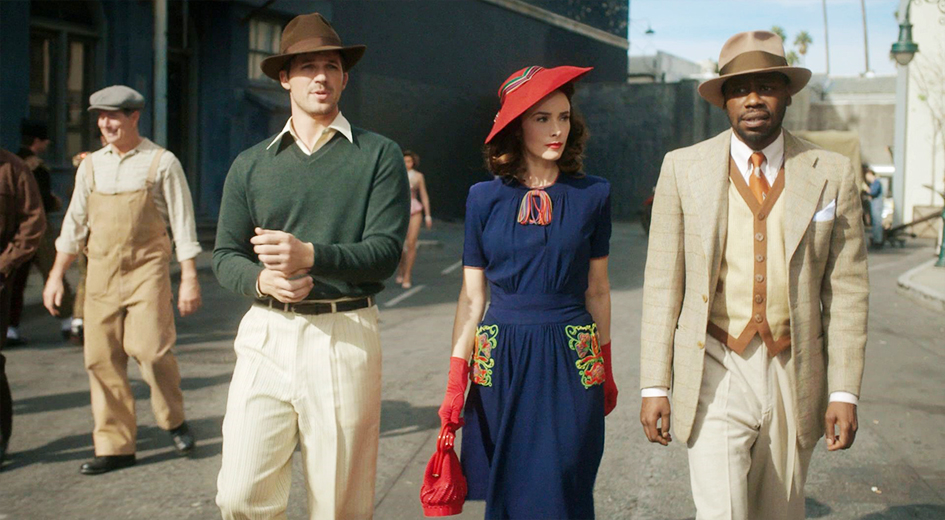 As America became more involved in WWII, women became a larger part of the war effort and workforce. Like servicemen, the estimated 350,000 women in the armed services mostly wore their uniforms out of the house. For women who worked on the production line and in factories, pants, denim, overalls, and work boots were common workwear.

As a way to further conserve materials, mid ’40s fashion softened its silhouette to rounded shoulders, collars, and hemlines with tight belted waists. Instead of wearing matching suits, women began to mix their blouses with different pants and skirts. Ballet shoes were a popular alternative to heels, came in all kinds of colors and patterns, and were worn with everything from pants to skirts to dresses.

For men, military style bled into everyday wear. It was common for those not on active duty to wear bomber jackets, trench coats, pea coats, knit undershirts, chinos, and aviator glasses. Due to L-85 and the economic toll the war took on most families, strict dress codes were hard to enforce, which lead to a rise in more casual styles. While the suit was still the most worn 1940s outfit for men, Hawaiian shirts, vests, and pullovers were increasing in popularity. These were paired with narrow-waisted wide leg trousers made from lighter wool and cotton blends in solid blues, tans, and greens.

Hats were a must for any outfit. The most popular was the wool felt fedora, in gray, black, dark brown, and tan. Homburgs were also common, mainly in gray and blue tones, though they’d lose their popularity by the end of the decade. 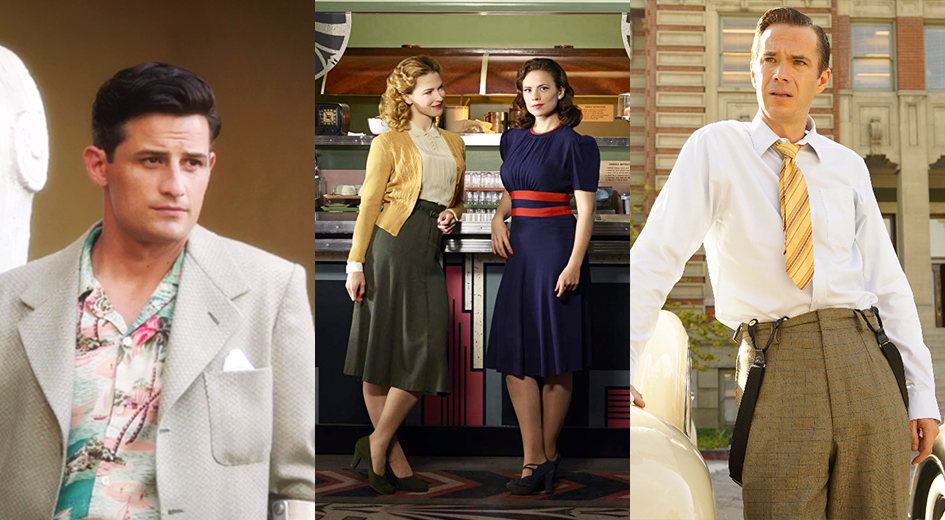 After the war ended, women’s fashion went back to the more traditionally feminine looks of the pre-war era. While pants were still popular, dresses became the go-to look again. Paris fashion houses reopened and ushered in an array of new styles, but many featured a more natural or asymmetrical silhouette compared to the soft curves of the mid 1940s. During the day, hemlines fluctuated from just below the knee to mid-calf, but evening dresses could range anywhere from ankle to knee length.

Men’s fashion changed dramatically in the late 1940s with styles trending away from the military look. Suit jackets became looser with pronounced shoulders and saw the return of the double breast. Cuffed pants became popular again with high waists, pressed front creases, and straight legs. Like women’s fashion in the mid ’40s, mix and matching suit jackets, sportscoats, and trousers was becoming more popular than matching sets. Vests returned as part of the ensemble, but were not the staple they were in the pre-war era. 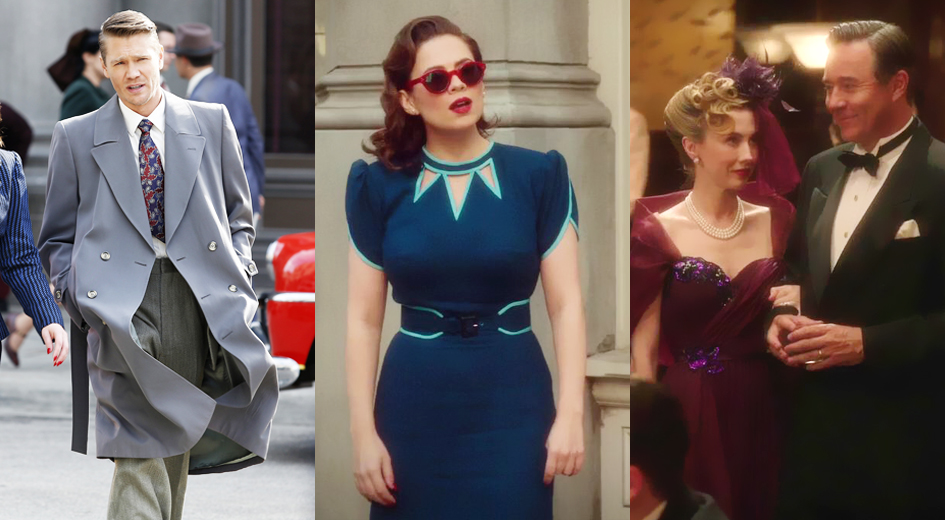 While styles evolve throughout any decade, there are some basics that help pull together any type of look. It’s important to remember that while hemlines rose and necklines deepened in the ’40s, it was still a very conservative time in American fashion. Women often wore nude stockings and nude full coverage undergarments so they wouldn’t show beneath their clothing. Red nail polish and red lipstick were also easy go-to accessories to complete many women’s outfits.

Common 1940s clothing staples for men were full coverage briefs, crew neck white undershirts, black socks, and black or brown wingtip, loafer, or oxford shoes. These details may be small, but they help bring the entire look together. If you’re trying to create a ’40s look, be sure to consider all the little things that make the overall outfit work.