How to Create 1990s Hairstyles

When it comes to fashion, hair, and makeup, the 1990s are in. As a Central Casting Background Actor, keeping up with the latest trends helps you put great modern looks together, but can also help with period roles using materials you already have. So whether you’re booked on a show set in the 1990s like Young Sheldon, For All Mankind, or That ‘90s Show or just want to put a look together with a ‘90s flair, this guide to 1990s hairstyles will help you get started.

In the 1990s, hair ran the spectrum from minimalist pixie cuts to crimped waves with butterfly clips. Whether it was oversized accessories or volume, there was no such thing as “too much” when it came to ‘90s hairstyles. The wave of new technology, rise of consumerism, and strong sense of multiculturalism brought a variety of styles, like grunge, hip hop, and punk into the mainstream and created more room for individuality and experimentation with hair.

Big hair was still on trend from the 1980s, but ‘90s styles were less about teased volume and more about natural frizz. Bouncy curls, feathered bangs, and crimped waves were all options when going for volume looks. More relaxed ‘90s hairstyles featured middle parts, straight hair with curled ends, and messy buns.

You can’t talk about ‘90s hair without talking about The Rachel, Jennifer Anniston’s iconic hairstyle from Friends. While the cut itself was unique, the boxy layers, face framing, and curled in ends were all touchstones that were imitated often throughout the decade.

Brandy was also a ‘90s hair icon, popularizing micro braids in a variety of looks from casual styles on Moesha to elegant updos on the red carpet. Another highly imitated look was Janet Jackson’s box braids in a high pony with white headband style from the 1993 film Poetic Justice.

Accessories were a big part of any ‘90s look. Colorful or patterned scrunchies, butterfly clips, hair beads, pins, and clips were all musts in 1990s women’s styles. 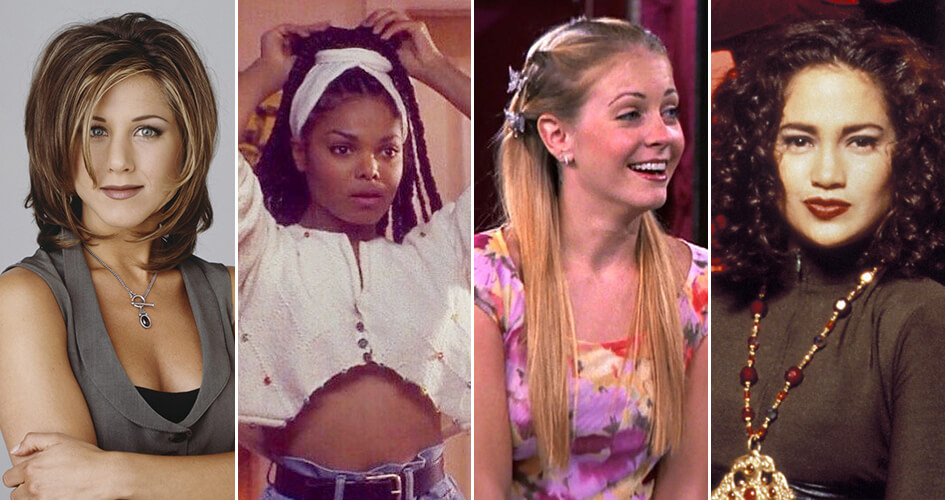 From low fades to high mohawks to long styles, the 1990s had iconic looks for all hair lengths. Common short hairstyles included Caesar cuts (as sported by Jay-Z throughout the decade), spiked hair with or without frosted tips (popularized by Backstreet Boys and NSYNC), flat tops (Will Smith in The Fresh Prince of Bel-Air), and bowl cuts.

Cornrows were common in both straight back and middle part styles, often sported by NBA players like Allen Iverson. Shaped afros from the 1960s-70s were given a modern spin and low fades with 360 waves were popular.

One of the most iconic medium length cuts for men was The Heartthrob, named after stars like Leonardo DiCaprio and Brad Pitt who often sported the look. For this style, hair was cut into bob and pushed back with fringe falling over the face. Curtain cuts were similar for a more preppy look, with medium cut hair pushed to the side and often dyed blonde. 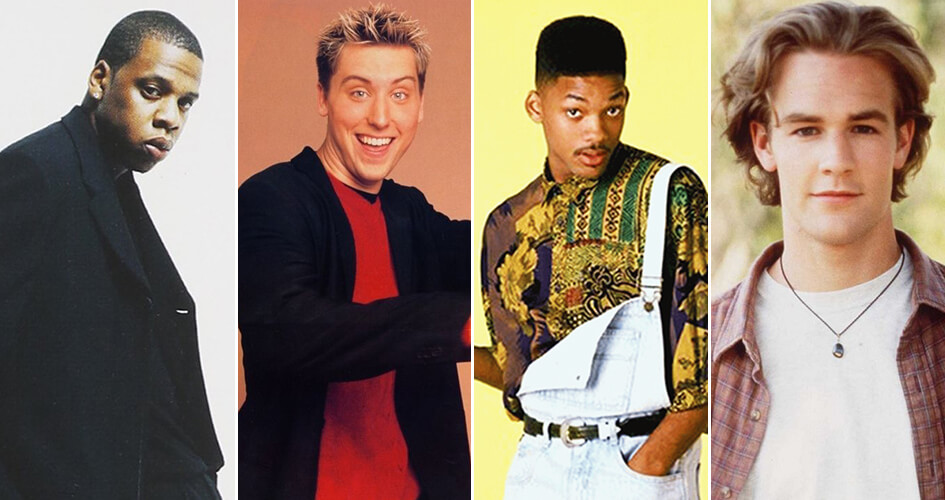 Creating your own 1990s looks

When booked by Central Casting, always read your details fully and carefully before crafting your look. These details can include very specific instructions for the hairstyle you need to emulate or may allow room to create your own ‘90s-era appropriate look.

If you’re creating your own style, keep in mind that each production has its own aesthetic. You may be able to pull off perfect volumes curls, but that look may not be right for your role or the production. That’s why it’s important to understand your details before getting ready for set.

If you need inspiration or instructions for how to create a style, YouTube has how-to videos for a variety of looks for your hair type.

Ready to put your entire 1990s look together? Be sure to read through our ‘90s wardrobe and makeup guides.