An Introduction to 1990s Makeup

There are many ways to become a successful Background Actor, including showing up on time, being professional on set, and putting together great looks. With Central Casting, you can play a variety of roles, including for shows set in the 1990s like Young Sheldon and That ‘90s Show and in flashback scenes like in Queens and This is Us. Need to create a 1990s makeup look? This guide will help you get started.

From grunge to glitter, ‘90s makeup covered both ends of the spectrum, but was generally less bold than the 1980s aesthetic. While natural and grunge looks were popular through the early to mid ‘90s, styles became brighter and more glittery as the end of the decade approached. Color palettes ranged from burgundies and browns for eyes and lips to pastel blue shadow paired with frosted lips.

If you need some 1990s inspiration, Jennifer Anniston, Brandy, and Jennifer Lopez were some popular trendsetters of the decade. 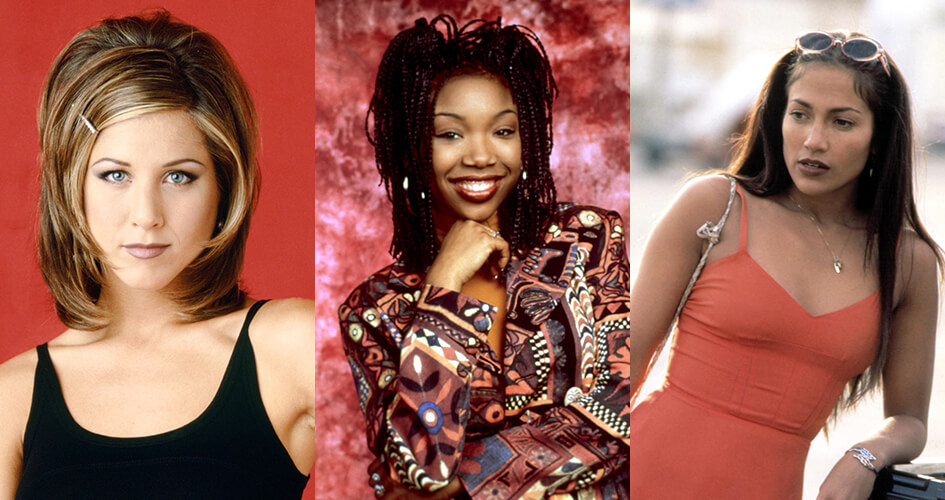 Whether going for a natural barely there look or a bolder grunge style, eyes and lips were the focus of most 1990s makeup.

Frosted blue was one of the most popular eyeshadow colors in the 1990s, with color usually extending all the way to the brows. Variations for this look included other bright pastels, like pink, violet, and green, often accompanied by glitter in the late ‘90s. A smokey eye with thick smudged eyeliner was the grunge alternative or brown tones with matching eyeliner for a more natural look.

Another instantly recognizable ‘90s makeup trend was burgundy or brick-brown lipstick. For bolder looks, bright red was a staple and for more natural, a matte nude. No 1990s lip is complete without heavy lip liner, sometimes in a darker or contrasting tone. Lip colors started out matte then gave way to glossy frosted lips later in the decade.

Natural foundation was key to many ‘90s styles to allow the eyes and lips to pop. Matte foundation was the standard base for most looks, with a generous amount of translucent power to really nail down the matte finish. Blush was not the focus of most styles and tended to be more of a light dusting in pink or warm tones on the apple of the cheek. Body glitter was also popular, especially among teens and young adults.

Creating your own looks

The most important thing to remember when creating any look for set, is to start with your details. Each production will have a different 1990s style they are aiming for, which can also change from scene to scene. So even if you’re a ‘90s makeup expert or you’ve worked on that production before, always read your details to ensure you’re creating the desired look.

Also keep in mind, it’s easier to add than remove. If you aren’t sure how far to take a look, it’s a good idea to start with a solid base and bring makeup to set with you to add finishing touches based on instructions from the makeup department.

Don’t forget about your nails. Like makeup and fashion, current nail trends can be too modern for period looks. Be sure to read job posts and messages from Casting Directors carefully to see if there are any requirements regarding artificial nails. If you’re working on a period show and are unsure if your nails will fit the look, please reach out to your Casting Director to confirm.

Want to learn more about creating makeup looks? Check out our hair and makeup article category for guides and tips to help you have a successful day on set.