Just like with putting your wardrobe together, applying the perfect makeup for your role is a big part of having a successful day on set. As a Central Casting Background Actor, you have the opportunity to work on movies and TV shows set in a variety of time periods, including the 1960s in productions like The Wonder Years, Why Women Kill, and This is Us. While you should always use the information in your details when creating your looks, this 1960s makeup guide can help provide some inspiration.

Early 1960s makeup was largely a continuation of late ‘50s styles with soft blush, red-pink lipstick, matte eyeshadow, winged eyeliner, and lots of powder. For most women, this was the basis for the standard look throughout the decade and tended to be favored by older generations when bolder modern styles became popular.

By the mid ‘60s mod and babydoll looks took over makeup trends, which revolved around bold eyes. Pastel eye shadow, black crease shadow, winged eyeliner, and heavy fake lashes with light blush and pastel pink lips were integral to these types of styles.

At the end of the decade the hippie look gained popularity, which focused on a more natural look of light brown mascara, clear lip gloss, and sparse blush and powder.

If you’re looking for inspiration to create your own looks, Twiggy, Diana Ross, Nancy Kwan, Diahann Carroll, and Brigitte Bardot were prominent trendsetters of the era.

Like with modern styles, there are a lot of elements that go into the perfect 1960s look, but the eyes were always the main focus.

Most eyeshadows were matte pastels, though some had an iridescent shimmer. It was popular to match your eyeshadow to your eye color, like green tones for green or hazel eyes. To make it a mod look, unblended black eyeshadow was applied in an arch to the crease line and paired with white or a pale eyelid color.

Starting in the mid-1960s, fake eyelashes became one of the biggest style trends. They were usually worn on both the upper and lower lashes, sometimes even layered on top of each other for a fuller look. For those who opted for a more natural style, mascara came in a variety of colors, from standard black to pastel purple. While fake lashes may be authentic to a 1960s look, they may not be right for the production you’re booked on, so refer to your details before applying fake lashes.

Eyebrows were generally shaped and defined, though this ranged from naturally polished to heavily shaped and filled in.

While the 1960s began with matte foundation and heavy powders, styles trended to sheer looks allowing for a more natural base. The main goal of foundation and powder was to add a glow to the face while allowing the eyes to pop. Blush was applied sparingly under the cheekbone in pinks, corals, and peaches to add subtle definition.

Lipsticks ranged from reds and browns to pastel pinks and corals. Most lipsticks were matte, but sheen looks became more popular in the mid to late part of the decade. 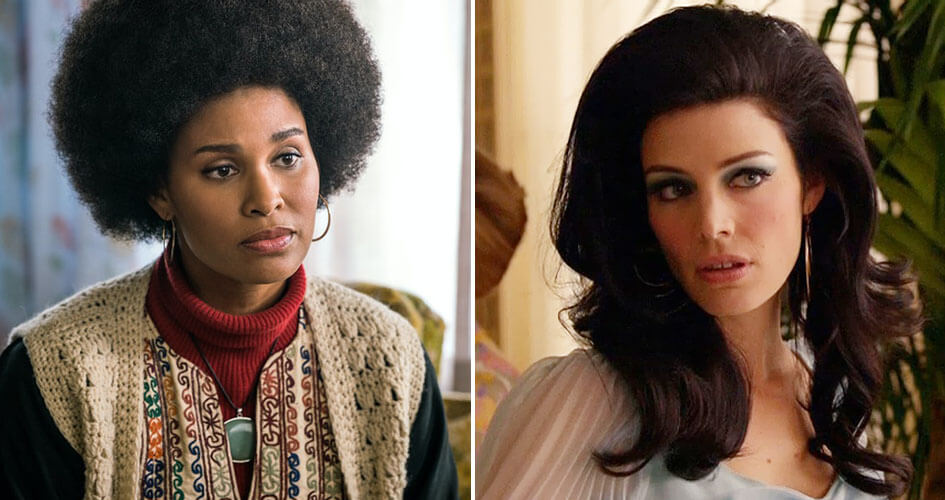 Creating your own 1960s makeup look

Remember, you should always base your looks off of the information given in your details. Makeup can not only vary by year, location, and occasion, but by that production’s unique aesthetic. A 1960s neighbor in WandaVision won’t necessarily have the same look as a 1960s neighbor in For All Mankind, so always defer to your details and category when putting your makeup on for set. If the project you’re working on has aired episodes, looking at styles and color palettes from similar roles can also help provide inspiration for your own look.

It’s always easier to add than remove, so if you’re not sure how far to take a look, the makeup department will likely instruct you how to finish or polish your makeup on set with the products you bring with you.

Looking for more ‘60s inspiration? Check out our 1960s wardrobe guide and other decade looks in our wardrobe article category.