When you work as a Background Actor, every day can feel like Halloween and the same can be true when you work at a Central Casting office. On any given day at one of our offices in Los Angeles, New York, Georgia, or Louisiana you’ll likely find a police officer, doctor, or soldier - or, at least, a Background Actor dressed up as one. What you don’t expect to see, is a ghost.

With Halloween right around the corner, we decided to investigate one of Central Casting’s enduring mysteries: The Flower Street ghost.

When Burbank, California was founded in 1887, much of the land was purchased as farm lots, including the land on Flower Street that currently houses Central Casting Los Angeles. Since then, a railroad, Interstate 5, and warehouses have been built on the surrounding land that used to house a family farm.

The beginnings of a ghost story

Around ten years ago, a former Central Casting employee who also worked as a paranormal investigator asked Training Specialist Laura if she knew a ghost lived on the second floor. This employee described the ghost as a man in overalls and a straw hat. On a separate occasion, another employee mentioned seeing a ghost on the second floor dressed the same way. Though the paranormal investigator described the ghost as “interested, but not angry” there was a period where many employees were scared of going upstairs. Thus, the legend of Farmer John, Central Casting’s ghost, was born.

“Back in the day, there was a couch up on the second floor where I would take naps,” Casting Director Mariann said. “There weren’t many lights and I had to tuck myself in with a blanket because it was so cold. One day I woke up from my nap and all my blankets were on the ground. It was weird, but I didn’t think anything of it. Three weeks later it happened again and I got spooked! Then I remembered Farmer John. I swear I saw him in his overalls and straw hat. For a while when I went up there I’d get so scared the hair on the back of my neck would stand up.”

Laura also had an experience she thinks may have been Farmer John. “I was here all alone on a Saturday,” she said. “I got a really creepy feeling and when I looked up, I saw someone upstairs then I heard a loud noise in the lobby. I grabbed my stuff and left right away.”

While other employees have experienced weird occurrences in the office, they stress that a ghost wasn’t responsible.

“I came in at four a.m. one morning when I was a Casting Director,” said Registration Manager Layla. “I heard a very loud noise, like someone flipping over a desk, in one of the offices. I waited until another Casting Director came in at four thirty and whispered that I thought someone was in the office and that I was going to check it out. I looked, but nothing was out of place. Another thing that happened, was when I was here with one other Casting Director on a weekend. I looked up from my desk and saw these flashing lights coming from the second floor. I asked the other Casting Director, but she didn’t see anything. We thought it may have been the development team who worked up there testing cameras or something, but when we went to investigate, no one was there. I don’t know what caused those two incidents, but it definitely wasn’t a ghost.”

Senior Vice President Franklyn Warren offers his definitive answer on whether he believes a ghost haunts the second floor. “I used to have an office up there,” he said. “There’s no ghost.”

According to author Wes Clark, in the early 1900s a man by the name of J.W. Fawkes owned a ranch that was roughly between Victory Blvd. and Flower St. Fawkes was a well-known troublemaker in the Burbank community and was known for building an aerial trolley between Lake St. and Flower St. The photo below shows the trolley and a house that sits roughly on the area where Central Casting Los Angeles currently resides. Could this house be the reason Farmer John haunts Central Casting? 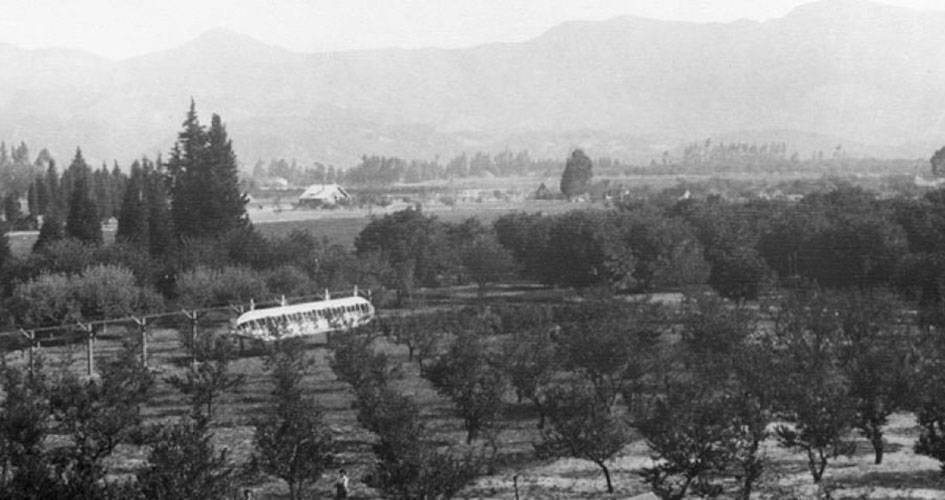 Other than some flickering lights and spinning clocks, it’s been a while since the alleged ghost has made an appearance and Central Casting employees are split on whether he actually exists. So now you decide, do you believe in Farmer John?

Want to learn more about Central Casting? Find out the origin of the term “straight out of Central Casting” and find out when extras became Background Actors.